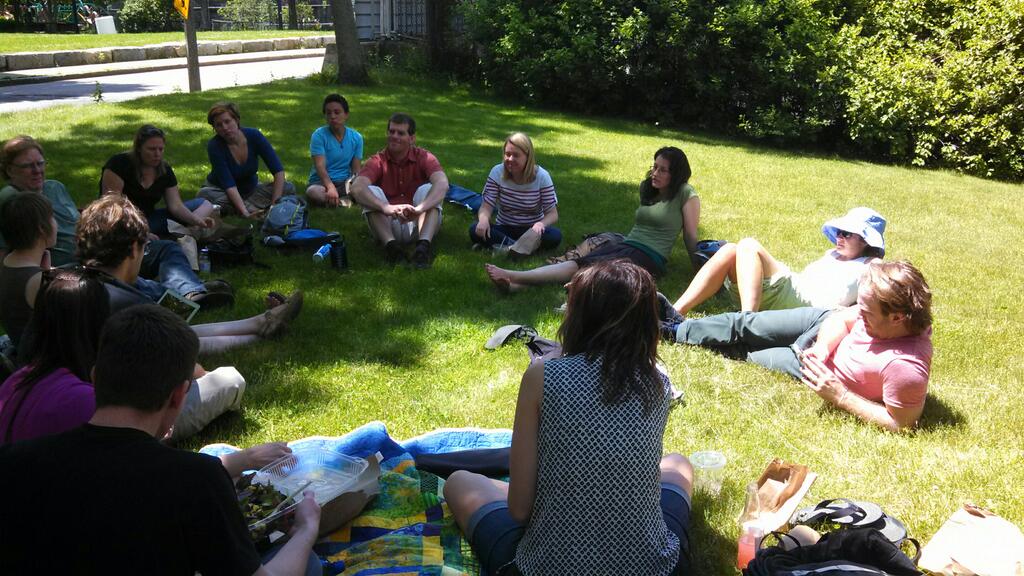 This Sunday morning (August 7th) we will be growing our spiritual understanding in Johnson park*. Join us at 10:35 am there or on the phone. Hope to see you then.

From Paul’s letter to the Corinthians:

And my speech and my preaching was not with enticing words of man’s wisdom, but in demonstration of the Spirit and of power

* Johnson park is across from the Green St. T station, we can generally be found across the path from the fountain, in the grass under the trees, usually on blankets.

Get ready for an amazing service tomorrow! As always, where we are gathered together, God is there in our midst. 🙂

As a head’s up for tomorrow morning, the community room is currently without heat (as of Saturday afternoon, anyway) so sure to dress appropriately. We will have a space heater, but it is probably worth bringing an extra blanket or jacket. See you there!

Hi lovely people! Here is a Psalm to get us ready for church tomorrow morning:

Raise a shout to the Lord, all the earth;

worship the Lord in gladness;

come into His presence with shouts of joy.

Acknowledge that the Lord is God;

He made us and we are His,

His people, the flock He tends.

Enter His gates with praise,

His courts with acclamation.

For the Lord is good;

His steadfast love is eternal;

His faithfulness is for all generations.

Please join us tomorrow morning for a beautiful service filled with love and Scripture! We welcome you in person or on the phone:

In preparation for this Sunday’s church service, I thought it would be fun (and hopefully inspirational!) to share my Scriptural Selection for the week, thinking of the message of the Lesson-Sermon as part of the response. Want to learn more? Join us! Information about place and time, as well as the phone number to call in, is at the bottom of the post.

From Job’s speeches in the New Living Translation:

“Is not all human life a struggle?
Our lives are like that of a hired hand,
like a worker who longs for the shade,
like a servant waiting to be paid.
I, too, have been assigned months of futility,
long and weary nights of misery.

Lying in bed, I think, ‘When will it be morning?’
But the night drags on, and I toss till dawn.
5My body is covered with maggots and scabs.
My skin breaks open, oozing with pus.

“My days fly faster than a weaver’s shuttle.

They end without hope.

I cannot keep from speaking.
I must express my anguish.
My bitter soul must complain.

my friends laugh at me,
for I call on God and expect an answer.
I am a just and blameless man,
yet they laugh at me.
People who are at ease mock those in trouble.
They give a push to people who are stumbling.
But robbers are left in peace,
and those who provoke God live in safety—
though God keeps them in his power.

“How frail is humanity!
How short is life, how full of trouble!
We blossom like a flower and then wither.
Like a passing shadow, we quickly disappear.”

Then the Lord answered Job from the whirlwind

Please join us tomorrow morning for a wonderful worship service at the Community Room of Eastern Bank!

For our third hymn we will be singing Water hymn by Vaughan & Glass, the words can be found at the bottom of this post.

This week the lesson we have been studying, which we will read in our Sunday service is on the subject “Life” and has a focus on God’s sustaining power. One passage from our Leader Mary Baker Eddy included in the lesson reads:

Millions of unprejudiced minds — simple seekers for Truth, weary wanderers, athirst in the desert — are waiting and watching for rest and drink. Give them a cup of cold water in Christ’s name, and never fear the consequences. … Those ready for the blessing you impart will give thanks.

(Mary Baker Eddy, Science and Health with key to the Scriptures, pg 570)

How are you giving this cup of cold water to receptive hearts today?

The lesson for this week is on the Subject of Sacrament. What is this sacrament, how do we partake of it? Our leader and the founder of Christian Science Mary Baker Eddy makes clear that to partake of the sacrament we must follow Christ’s teachings and heal the sick, raise the dead, cleanse the lepers, and cast out demons. She writes:

It is the living Christ, the practical Truth, which makes Jesus “the resurrection and the life” to all who follow him in deed. Obeying his precious precepts, — following his demonstration so far as we apprehend it, — we drink of his cup, partake of his bread, are baptized with his purity; and at last we shall rest, sit down with him, in a full understanding of the divine Principle which triumphs over death.

SH 31:14-22 (to .)
From Concord Express – A Christian Science Study Resource: The King James Version of the Bible and Mary Baker Eddy’s published writings

Following Christ’s example seems like a tall order. Where do we start? An article from the Christian Science Sentinel shares a healing which showed her what it is to be baptized, submerged in Spirit. You can read it at jsh.christianscience.com/baptism

This Sunday July 12th we’ll be meeting in Johnson Park across from Green St station on the orange line at 10:35AM.

Also: first time to a Christian Science church service?  Find out what to expect by checking out our “Services” page: https://jpchurch.com/services/

Just a loving little reminder note: the Sunday service will be in our regular spot, the Eastern Bank community room.  And we’ve got our call-in line, too, for anyone who wants to catch us on the phone from wherever they are.  All the details are below.

We’ll be hearing about the simple message of God being the only, the ultimate creator.  And the only cause.  How’s that, you ask?  Come check out the service to hear more.  😉

Passing along a wish that was sent to me recently: “Happy Christmas season!  Enjoy the love around and within you.”

Hezekiah was a pretty cool king.  The previous king, having powerful allies, had incorporated the religion of his allies into Jerusalem’s Temple, including idol worship, and eventually closed the Temple.  Upon becoming king, Hezekiah’s first acts included restoring the Temple and cleansing his country of idol worship.

Then he got deathly sick.  And Isaiah, a big-deal man of god for the last four kings, came to check it out and reported, “Sorry pal, get your house in order, ’cause you’re not sticking around.” [Isa. 38:1, heavily paraphrased—I encourage you to go read the real version.]  Hezekiah was, understandably, upset, and now had no recourse but to confront his mortality honestly.  But while open-heartedly bewailing his pain and tragedy, he had two realizations: (1) that God doesn’t sustain sin [Ibid 17], and (2)

These realizations: that sin is transitory, and that life is what expresses God’s glory, may have fueled his protest against his death-sentence, knowing what God preserves and what He doesn’t:

“Remember how I’ve lived my life. I’ve lived faithfully in your presence, lived out of a heart that was totally yours.” [Ibid 3]

Isaiah was already on his way out, but God didn’t even let Isaiah leave the room [II Kings 20:4] before having him turn around and promise recovery, health, and life to Hezekiah!

Now Hezekiah’s inner sense had been keen enough to protest that this apparent story of sickness and death of a righteous life didn’t fit how God ran the show, but at this point, having received conflicting diagnoses, he felt like he could use some assurance, so he asked Isaiah for some.  Isaiah said sure: God can move the time on the sundial by 10 minutes as a sign, a promise.  Hezekiah pointed out that the time on the sundial was always moving forward, so God’d better move it back 10 minutes, just to make it clear it was Him.  And, indeed, so it happened [Ibid 11].

Three days letter, Hezekiah was not dead but well.  He went on to build up Jerusalem, defeat (through reliance on God, without touching a weapon) a huge invading Assyrian army, and oversee great economic growth in his kingdom.

So next time it seems like everything’s (or anything) is going downhill, think of Hezekiah.  His keen sense of God’s truth can be yours, too.  Take a moment to honestly confront your situation.  Know God isn’t behind your fleeting faults, but that God’s glory is (and must be) expressed in your immortal goodness.

And, if need be, ask Him to prove it.

Call in to our services!